How about pasta? That’s not such a problem. We’ve also included some examples of vegan and non-vegan pasta.

It’s easy to find vegan pasta in supermarkets. Recently many supermarkets have begun carrying a small selection of whole-grain pastas as well. Vegans have to be careful with colored pasta. Black pasta can sometimes be colored with cuttlefish ink/イカスミ. Below are some examples of pasta available in Japan. 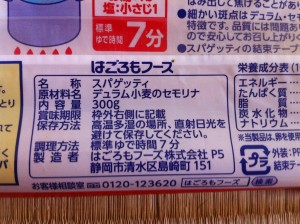 • De Cecco Fettucini no 303 All’uovo is not vegan because it has eggs. Ingredients: Durum wheat seminola, eggs. 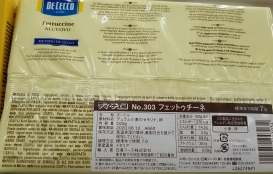 However, not all kinds of fettucini have eggs. The below product from Mujirushi Ryouhin does not. 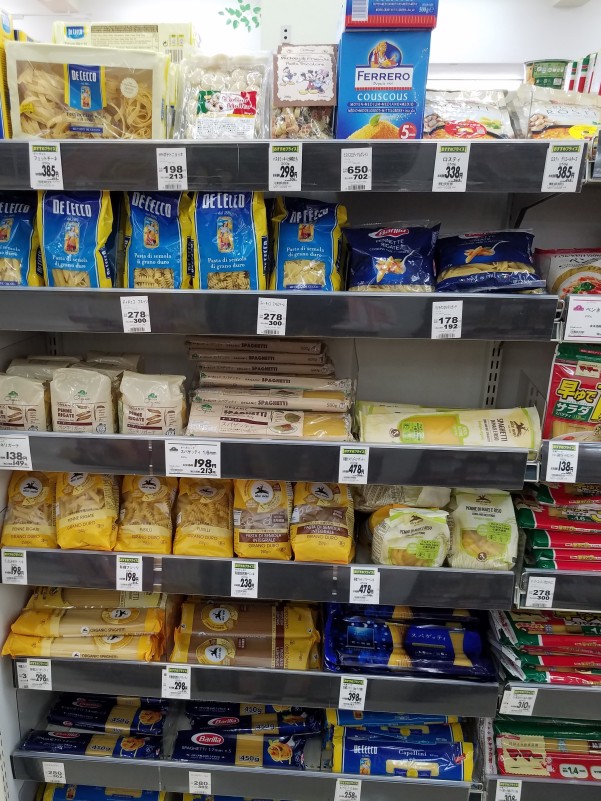 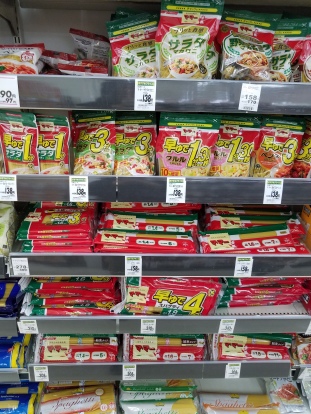 Products that include eggs and dairy are manufactured at the same facility. 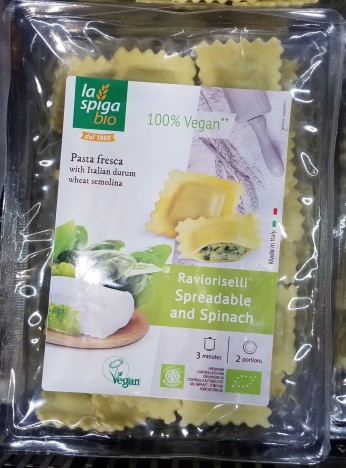 The first soba is not vegan as it contains egg white (卵白): 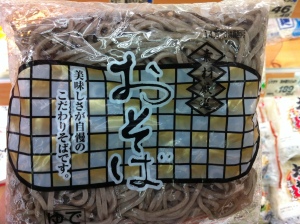 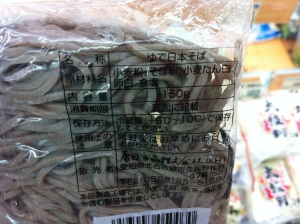 The soba below appears to be vegan. 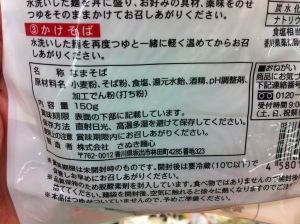 Tofu noodles are not very common, but supermarkets and convenience stores like Family Mart sometimes have pre-packaged noodle-shaped tofu with sesame sauce. The amino acids in the product are confirmed vegan, however, the manufacturer could not confirm if the sugar used in the product was bone char processed or not.

Roasted sesame was used to create the sauce. The products are meant to be eaten cold, without cooking. Open the noodle container and throw out the water, then add the sauce to the noodles and eat.

• Kibun Tofu Somen Style with Mentsuyu Sauce/紀文 豆腐そうめん風 麺つゆ付き contains fish in the sauce, as is typical for mentsuyu not made in a vegan restaurant.

• Kibun Tofu Somen Style with Egg/紀文 玉子とうふそうめん風 is not vegan as it contains fish and egg. 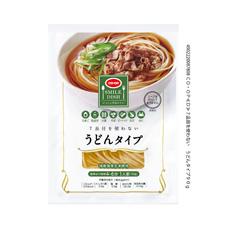 Manufactured in a facility that also makes products containing soba and egg. 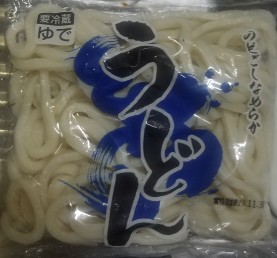 Although there may be a few choices for fresh or dried ramen noodles in the grocery store, probably 80-90% of ramen noodles are not vegan as they contain egg. Fresh (nama) ramen may also come with a non-vegan sauce packet. 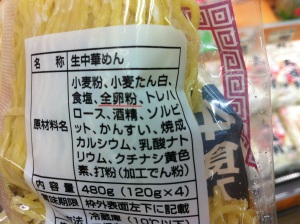 Here is another example of an ingredient list of ramen noodles that are not vegan because they contain calcium derived from shells (貝殻カルシウム), spotted at the Ramen Museum in Yokohama. 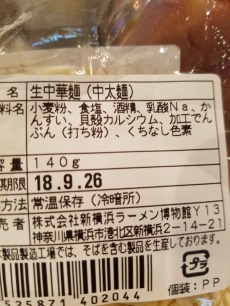 Let’s move on to discussing some noodles you can take with you while you’re on the go or only have access to limited cooking facilities.

It can be hard to find vegan cup noodles in stores in Japan and there’s a high probability you’ll have to head to specific stores to find them. More can be ordered online at websites like iHerb. 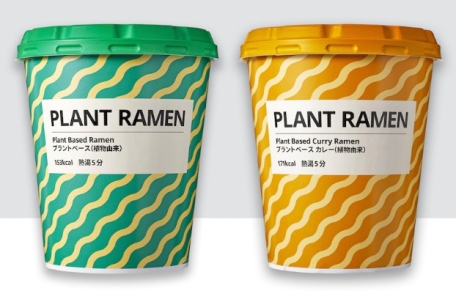 To celebrate their 35th anniversary, Kyushu Jangara Ramen, which has five stores in Japan, all in Tokyo, created an in-store Kumamoto-style vegan ramen with garlic oil, as well as a vegan cup noodle. The vegan cup noodle has sold out online, so the stock currently in their restaurants is what’s left, and when it’s gone, it’s gone. These join their permanent choices of vegan soy sauce or salt ramen. You can see the vegan ramen they sell to be eaten in-store here (bilingual). The press release about the limited-edition products is here (Japanese).

The vegan restaurant chain T’s makes instant vegan cup noodles in two flavors. Both flavors use non-fried noodles and as few additives as possible. They are reported to contain palm oil by the blog sushivoyage.net (Japanese).

This product has been reformulated and repackaged, with a slightly different ingredient list. The new version of the product, launched September 2019, is shown here: 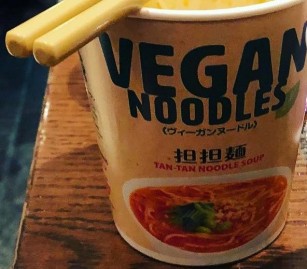 The older version of the product is shown below. There may still be some online retailers selling this older version: 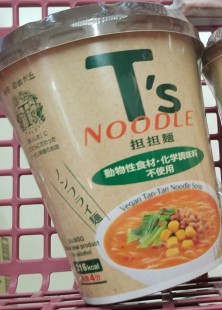 They have been found at (availability may vary):

Although they don’t appear to be carried in any physical stores, Shojin Ramen Zendo cup noodles can be purchased online in sets of 12. They don’t use animal ingredients or the five pungent roots. There’s an in-depth article about this product here at Sora News. The company has made other flavors of animal-ingredient free noodles before, but these are soy sauce-flavored with soy meat and menma.

Vegan instant noodles that require cooking on a stove are rare in Japan. As with vegan cup noodles, it’s likely you’ll need to head to a specific store to get them, or order online.

Harajuku-based noodle shop Chipoon is selling two kinds of instant ramen, both available with or without toppings, in their online vegan ramen shop (Japanese).

A company called Maisen sells brown rice ramen at the link below, which is the only item specifically marked animal-ingredient-free/動物性原料不使用 on the “vegetarian” section on their website. Unfortunately, the plain doughnuts in the “vegetarian” section contain fish-derived collagen. No other animal-derived ingredients are apparent from reading the ingredient list of the items in that section, but Maisen does not disclose on the website what their emulsifier used in certain items is made of, only stating it does not have dairy.

The brown rice ramen is gluten-free.

Per the company as of February 2020, the bag version of Nongshim Shin Ramen made and sold in Japan does not contain animal ingredients. The bag version is sold in 7-11 convenience stores and you can also find a three-pack for sale online. A five-pack is also available in Don Quixote. However, there is an imported bag version (from Korea) that contains eggshell calcium/卵殻カルシウム, beef seasoning/ビーフシーズニング and pork bone seasoning/豚骨シーズニング. All are listed on the ingredient list in Japanese. This nonvegan version has been spotted on Rakuten and at Carnival import store. Check the ingredient list of the bag version before you buy. 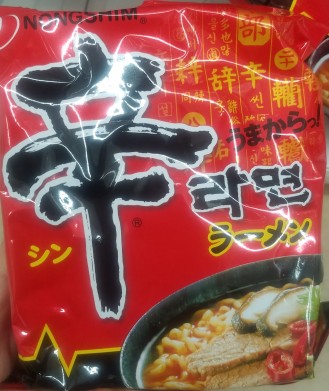 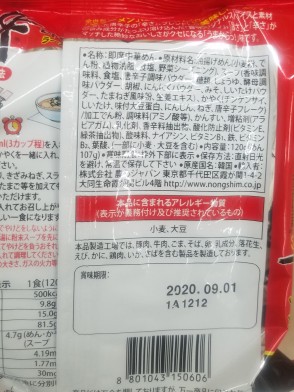 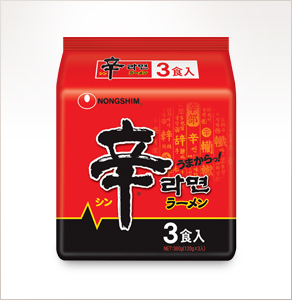 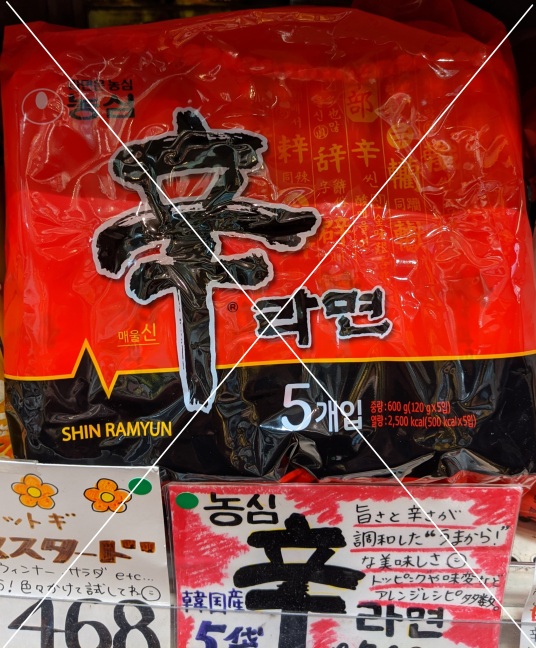 Another brand you might be able to find is Samurai Ramen, which can be found at vegan food festivals or in some Don Quixote stores or ordered online. It comes in both a less expensive plastic pack and a gold gift pack. The plastic pack version is also available at selected Gyomu Supermarkets for 198 yen. They both say “vegan” on the package.

There is also a version available that does not use the five pungent roots. It says “vegan” and “plant-based” on the package.

The list of Gyomu supermarkets carrying the 198 yen plastic pack version is as follows: 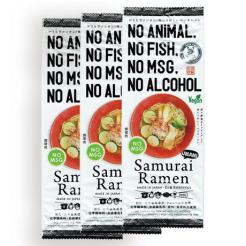 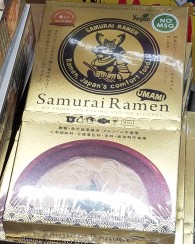 The following version does not contain any of the five pungent roots.

Ohsawa Veggie Brown Rice Ramen, manufactured by Sakurai Foods, comes in five flavors, soy sauce, miso, salt, sesame miso and dandan noodles. They all read “does not use animal ingredients/動物性原料不使用” in Japanese, and some of them may say “For Vegan” in English on the package. They use non-fried noodles. They don’t use chemical seasoning or sugar. See all the flavors here (Japanese).

Uses domestic wheat and brown rice flour. Does not use lye water. 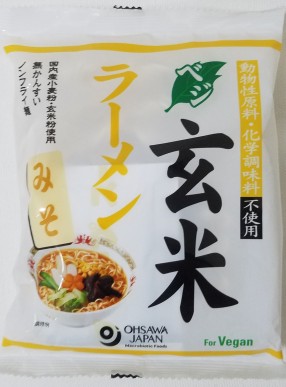 Uses “shimamars” salt, which is made by dissolving imported solar salt in Okinawa sea water and slowly boiling it in a flat pot over time.

Uses domestic wheat and brown rice flour. Does not use lye water.

Sakurai Foods, headquartered in Gifu, is a company making various types of vegan instant noodles. They can be found in health food shops or ordered online. From the English section of their website: “Our history begins in 1910, when the Sakurai family purchased a machine to process noodles in Gifu Prefecture, Japan. Maintaining operation through World War II and onward, in 1968, the Sakurai family business started to produce and sell additive-free and natural products without artificial coloring. At that time, the commercial industry was moving heavily into mass production and mass consumption, creating an era where efficiency in production was top priority. It was during this era that the Sakurai Foods defined their mission to commit to quality rather than to efficiency.”

To guarantee the safety of our goods, we are committed to manufacturing and selling a variety of food products with ingredients from domestically contracted farmers who use organic or ecologically friendly methods to produce their agricultural products. 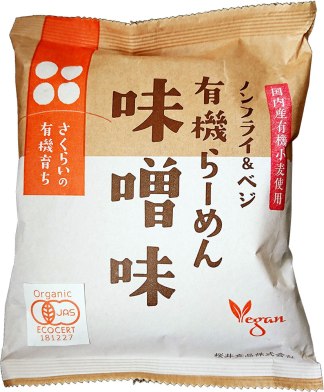 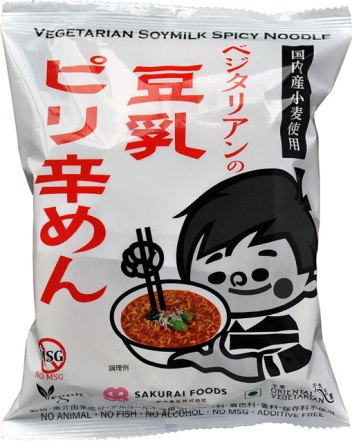 This version of the classic and usually non-vegan dish yakisoba is vegan/oriental vegetarian (does not use the five pungent roots) with no MSG.

Marked vegan in English on the package.

The Shibuya-based Tsurushiko cold noodle shop has launched one vegan flavor in their online shop. Morioka-style reimen was created by a Korean-born resident of Morioka, Japan in the 1950s, who amalgamated the spicy flavors popular in his hometown with the Pyongyang-style dish. Read about Morioka reimen at Visit Iwate (English) (shows non-vegan items containing meat).