You will probably notice that some of the candy in Japan contains milk. Vegans also need to check for things like ：

It appears that while bright pinks are often synthetically produced, soft pinks such as the ones in Japanese sweets like daifuku sometimes come from cochineal and occasionally lac.

The source of additional ingredients such as emulsifiers may not be known.

However, there is a lot of interesting candy in Japan that doesn’t list animal ingredients in the ingredient list (of course there is always a question about whether the sugar was refined using animal bone char and whether the colouring agents were tested on animals). Let’s have a look at some examples of candy in Japan, starting with what is most likely the first vegan certified candy on the mainstream market.

A product called Kanro Candy received the VegeProject Japan vegan mark in 2020. This certifies that it contains no animal products and the sugar is not bone char processed. For more details about the mark, check VegeProject’s website (English). 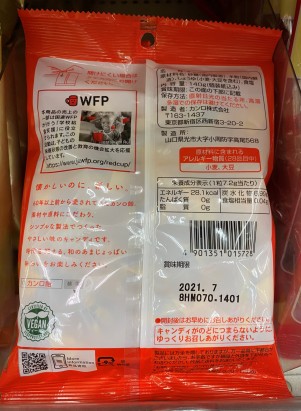 It’s also sometimes possible to pick up imported candies with a vegan certification. These Jelly Belly Chewy Candy Lemon & Orange Sours, Sour Grape & Sours have a vegan certification and say “no animal gelatin” in English on the front of the package. Check for these at Kaldi or Natural Lawson convenience stores (not regular Lawson). The product is made in Thailand. Photo taken in April 2021.

Products containing dairy are manufactured in the same factory.

Products containing dairy are manufactured in the same factory. 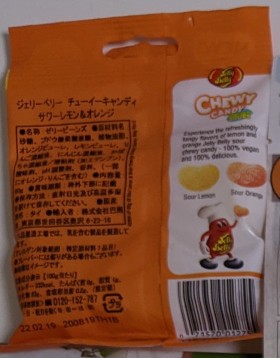 These Not Guilty Kiss Me Softly Sour Gummies, Hug Me Please Sour Gummies, and Hipster Bean, Fruit Flavour are all certified vegan. The ingredient lists are taken from the English-language ingredients on the packages. The photos were taken in a branch of Carnival import store in June 2021.

The Japanese-language ingredient list states that the product contains orange.

The Japanese-language ingredient list states that the product contains orange.

The Japanese-language ingredient list states that the product contains wheat and apple. 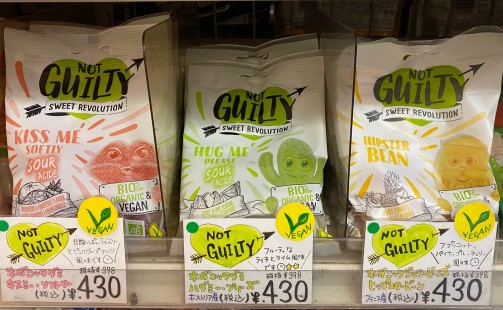 Bontan Ame/ボンタンアメ is a classic Japanese candy. The English-language website states all ingredients are of plant origin.

“What is Bontan Ame?
Launched in 1924, it is so unique and original that there is no confectionary like it. Its category varies: candy, soft candy or caramel. The unique texture and flavor have been highly regarded for decades.
Category: We have given Bontan Ame a category of its own. Since it has no competition and there is no similar product in the domestic market, we are proud of this unique product.
Background and Story of Development: Seika Foods was formerly Kagoshima Kashi Co., Ltd. and was in the business of glutinous starch syrup. One day, our founder saw his factory workers playfully cutting Chosen Ame (also called Gyuhi, a popular local confectionary in Kumamoto) into small pieces with scissors. This scene stuck with him and he came up with the idea of developing Bontan Ame. He added flavor and color to the candy and put them in a box like caramel. At the time, the target competition was Morinaga’s Milk Caramel.
Feature: All ingredients are of plant origin. The main ingredients are starch syrup, sugar, maltose and glutinous rice. Most of the glutinous rice we use is Hiyoku-mochi from Saga or Kumamoto Prefecture. Glutinous rice comes in unpolished. It is then cleaned, further polished and milled at our factory before being soaked overnight in cold water of 10℃ or below (known as “exposure to the cold”). The final process is steaming for two and half hours.
The finished candies are wrapped with a thin, starch wafer (made from potato and sweet potato flour) and they are soft, sticky and chewy. The fresh and sweet-sour flavor comes mostly from citrus fruits grown in southern Kyushu: Bontan extract (oil) from the Akune Pomelo; Sour Pomelo juice from Ichiki-Kushikino; and juice of Kyushu mandarin orange.”

The next one appears to be vegan, but which isn’t. It contains lac as a colouring agent.

However, Kasugai does make another variety of konpeito that does not contain lac.

From website: Colorful sugar confection that was transmitted from Portugal in the Muromachi period. You can enjoy 5 tastes (sugar, peach, apples, grapes, cider). Photo from website.

Here is another example of a product that looks vegan but is not. According to the manufacturer, in the ball type in the Chocolate Effects series, the shellac is listed as kōtaku-zai/光沢剤 , (food) polisher/brightener, so this product is not vegan.

In Japan, some types of candy that would ordinarily contain gelatine contain agar (寒天- kanten) instead. One example is the fruit jellies below. However it seems that many jelly beans made using agar also contain lactose, so are not vegan. 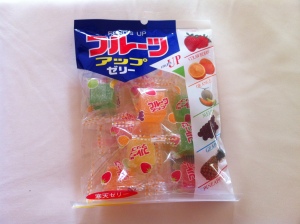 These similar-looking fruit jellies from a supermarket also use agar, but are not vegan because they contain cochineal (コチニール). 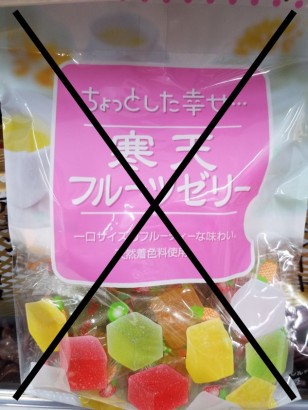 In general, import shops may be a good place to find vegan candies. Some of the pictures below were taken in an import store called Carnival in Kamakura.

Katjes gelatin-free gummy candies are unicorn, fairy, rainbow and heart-shaped sour candies in five flavors: black currant, peach, raspberry, lime and blood orange. They have been spotted in National Azabu Supermarket and at least one Lawson store in Tokyo, as well as import stores like Jupiter and Kaldi, Sony Plaza and Mini Plaza stores.

In response to the question, “So why aren’t your products vegan?” the Katjes website FAQ section states:  “This is because most of our products are coated with natural beeswax. Without coating the yummy products in the bag they would all stick together. There are currently exceptions like our sugar drizzled products “Wunderland”, “Salzige Heringe” and “Lakritz Batzen.” However, due to manufacturing, all of our products can contain traces of milk, which is why even our products without beeswax are vegetarian and not vegan.”

The German and Japanese ingredient lists on the package appear significantly different, possibly due to variations in labeling laws between countries.

May contain traces of milk.

Although the website lists this as a gluten-free product, the Japanese label states that it contains wheat. 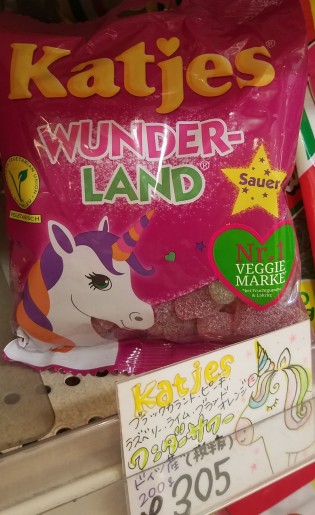 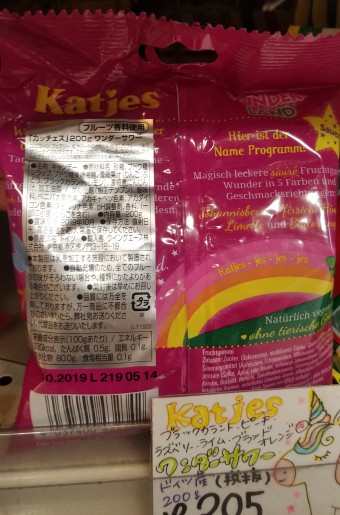 The Katjes Wunderland White Edition are not vegan as they contain beeswax to prevent sticking, as they are not drizzled with sugar. It appears to be listed on the Japanese label only as kōtaku-zai/光沢剤, (food) polisher/brightener, which is the same thing the shellac is listed as in the Meiji Chocolate Effects ball series.

The same goes for other types of Katjes found in Japan- they are not coated with sugar, so they contain beeswax so the product does not stick together.

The Trolli website describes them as “vegetarian,” but the ingredients appear vegan. Per the FAQ section on the Trolli website, “All Trolli products with the European Vegetarianism label are without animal ingredients. They are manufactured completely without gelatine and milk products. Instead of gelatine we use starch or pectin as a gelling agent. Good to know: our emulsifier E471 is also purely plant-based.” All four of the products below are on Trolli’s list of “completely vegetarian” candies. It’s been reported that the company has stated that the reason the Spaghettini are listed as vegetarian instead of vegan is that they may have traces of beeswax from processing, although this is not listed on the label.

The following Trolli Cola Sour Strips may be free of animal ingredients (aside from cross-contamination), but the source of the sodium lactate is not listed.

May contain traces of milk. 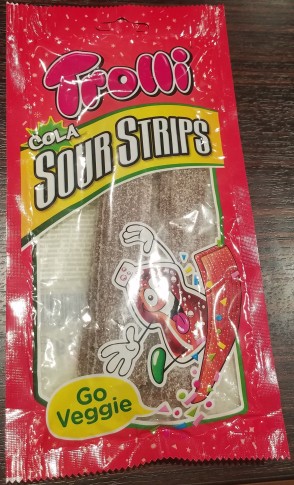 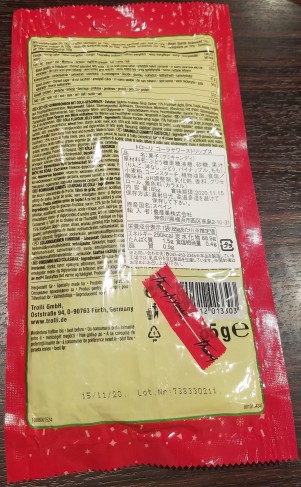 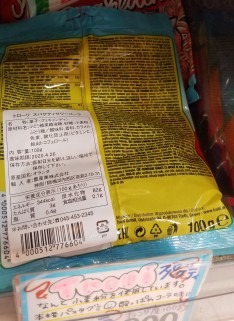 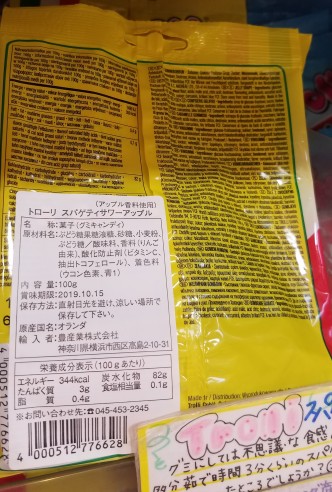 It’s possible to find Skittles from the U.S. in import shops. These also were found in the same Carnival import shop.

Made in a factory that also handles items containing egg and wheat.

Made in a factory that also handles items containing egg and wheat.

Marked “Gluten-free, gelatin-free” in English on the back of the package. Contains palm oil. Natural & artificial flavors. 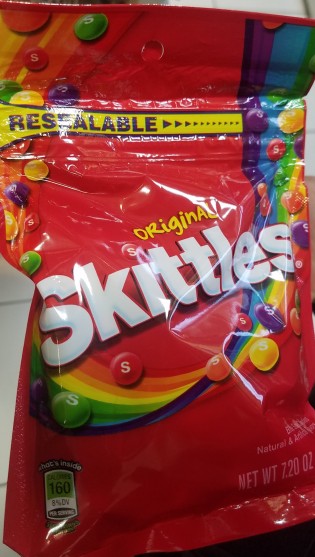 It appears an older version of this flavor had gelatin, so be sure to check the ingredient list before eating.

It appears an older version of this flavor had gelatin, so be sure to check the ingredient list before eating.

In general, 100 yen shops are a good place to look for candy. Here are just a few of the possibly vegan candies available on a recent trip to Can-do, a popular chain of 100 yen shops. 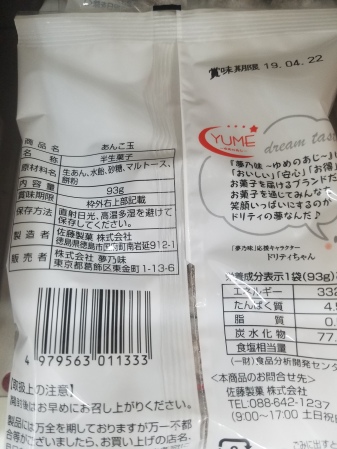 Per Wikipedia, “Gokabou is one of the Japanese wagashi, which is made and sold only in Saitama prefecture. Okoshi, a sweetened cake made of rice is mixed with sugar and then shaped into a cylinder. Wrapped in a sheet made by starch syrup and soybean powder and coated with soybean powder.” 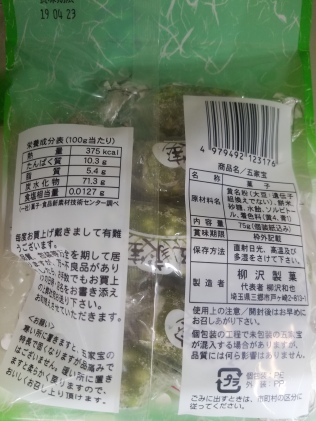 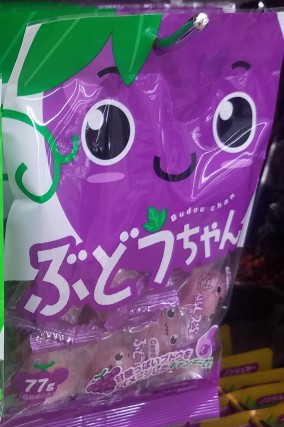 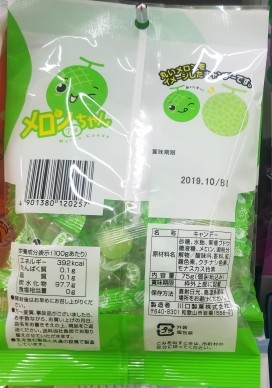 Made in a factory that also uses egg, milk, shrimp, crab, soybean, and cashew nuts.

From Wikipedia: “Karintō is a traditional Japanese snack food. Sweet and deep-fried, it is made primarily of flour, yeast, and brown sugar. It has a deep brown and pitted appearance, and takes the form of a bite-sized pillow or short cylinder.”

The following two products may be vegan. It isn’t clear exactly what the caramel sauce in them is made of, although the packages state there are none of the top 27 allergens contained within, meaning neither has milk/dairy allergens.

Product does not contain any of the top 27 allergens. 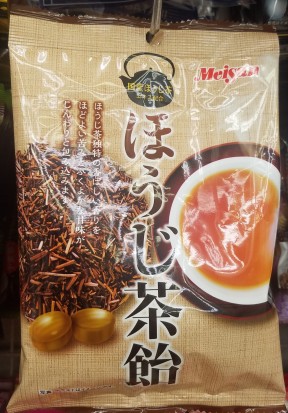 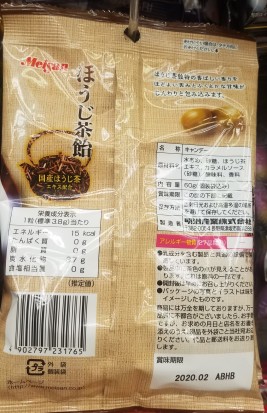 Product does not contain any of the top 27 allergens.

Produced in a factory that makes products containing dairy, egg, and wheat. 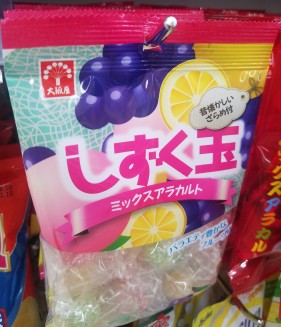 The following Okinawan Brown Sugar Candy may be vegan, but the package doesn’t specify what the edible oil is made out of.

Products containing dairy, soba, and peanuts are made in the same factory. 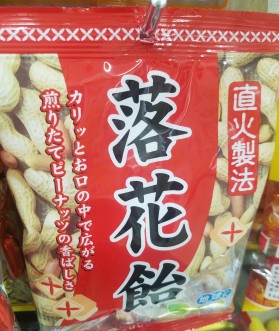 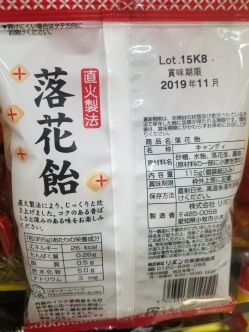 According to Wikipedia, “yōkan is a thick, jellied Japanese dessert made of red bean paste, agar, and sugar. It is usually sold in a block form, and eaten in slices.” It’s available many places in Japan, but these examples are also all from the 100-yen shop Can-do.

The box reads “contains none of the specified allergens.”

The same maker of a popular brand of adzuki bean popsicles in Japan also makes this item. 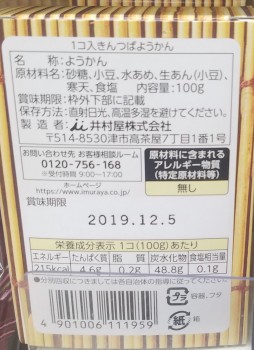 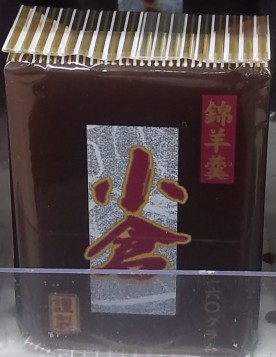 This version is smooth, without whole beans. 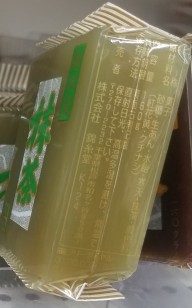 The following candy from the same Can-Do 100 yen shop is not vegan because it contains honey/ハチミツ. 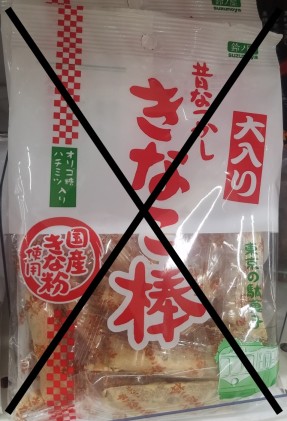 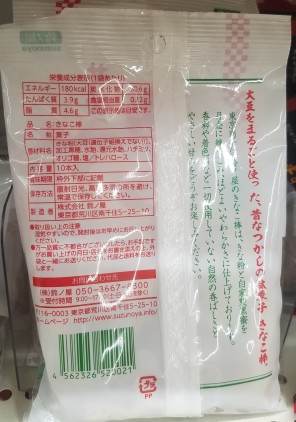 Dagashi is old-fashioned Japanese candy. Here’s an assortment of dagashi that may be vegan.

The following product is a powder that makes a drink resembling beer when water is added to it. Of course, it doesn’t contain real alcohol.

The following juice powder from the same company can be found in the candy aisle of some stores, but the website says you can add less than 120cc water to it to make juice. It was launched in 1961 and is the company’s longest-selling product.

These candy cigarettes were launched in 1951. These days, the website (Japanese) bills them as a stop-smoking aid.

The source of the emulsifier is not known.

The source of the calcium carbonate in the following product is not known.

This “drink jelly” was found near the dagashi in a candy aisle, but seems more modern.

Per the website, it doesn’t contain any of the 7 allergens that are required to be listed by law. 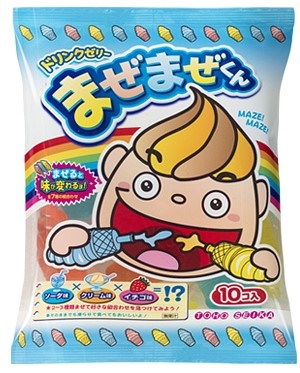 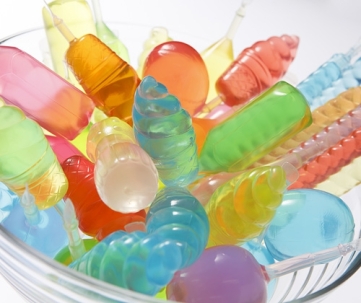