The sooner you can read Japanese food labels for yourself the better.

Unfortunately, well-meaning people (including those with a good understanding of Japanese) sometimes say food products are ‘ok’ for vegans, when actually they aren’t. They may also say something is ‘not vegan’ when it is, or is likely to be. For example people may say something isn’t vegan when they see the kanji for ’emulsifier’ (乳化剤), which includes the ‘milk’ kanji (乳). While emulsifier can be plant or animal derived, in Japan it mostly comes from soy and other plant sources. Of course to know whether something is or isn’t vegan often requires more than just language skills. It usually also requires knowledge about the source and composition of food ingredients.

Following is a short guide on how to read Japanese food labels, focusing on the ingredients. Japanese food labelling is not consistent and some labels contain more information than others. But, generally speaking, when checking whether a food product is vegan, there are a few specific places you should look. These are discussed below. If you are interested, a more comprehensive guide to Japanese food labels can be found on the Surviving in Japan blog.

If you don’t know much Japanese, it may be helpful to use a smartphone app like Worldictionary (it uses the smartphone camera to ‘read’ the labels and then provides a translation using Google Translate). If you’re still having trouble, one way to avoid long lists of ingredients is to eat mostly whole foods while you are in Japan.

This is an obvious starting point. Unfortunately it may not be possible to determine whether a product is vegan without contacting the manufacturer for more information about the source of certain ingredients.

Immediately after the list of ingredients you may see some allergen information in brackets.

In Japan, packaged food above a certain size is required to include information about the presence of the following 7 allergens in their food products:

It is recommended that they also give information about the following 21 allergens:

This makes a total of 28 allergens, sometimes referred to as the “28品目.”

You may see an item marked “Does not contain the 28 allergens/28品目を使用しておりません.” An example is shown below.

There is a good article about this subject, aimed at people with allergies, here at the blog SavvyTokyo. However, the article was written before the list was revised to include almonds.

Ready-made food at like that at outdoor stalls and vendors, small restaurants and izakayas, and many hand-made and hand-packaged products may not have the allergens labeled.

In addition, the law only appears to apply to actual allergenic components, not the substances themselves. Therefore, it’s possible that foods may include very processed derivatives of animal ingredients that no longer contain the allergenic components. In that case there does not appear to be any legal necessity for the manufacturer to mark that allergen on the package. Some examples of these types of foods are shown throughout the blog.

There may also be an allergen chart. The allergens in the product are highlighted.

You may also see an allergen chart on the front of the package like this showing which of the 7 allergens are included in the product:

However, as noted above, if a substance is processed to the point that it is no longer allergenic, it appears it is no longer necessary to label it as an allergen. For example, the Lawson Soy Protein Latte has an ingredient list of: Soymilk, defatted soybeans, coffee, sugar, vegetable oil, salt/flavoring, cellulose, emulsifier, stabilizer (thickening polysaccharide), sweetener (stevia, monk fruit). Product contains soybeans.

When Lawson was contacted about if this product contains animal ingredients, they stated that the emulsifier contains glycerin fatty esters from pig fat. Although pork is an allergen that is suggested, not required, to be listed on labels, they stated that due to the manufacturing process, it isn’t required to label it as an allergen anyway, as the allergenic substances are removed in the process. This means that allergen warnings alone will not always let you know if animal ingredients are in food.

This is not shown on the example above, but many food labels contain a statement about possible cross contamination. You may see:

This means that the product is manufactured in a facility that also makes products containing egg, milk, wheat and peanuts (in the above example), so there is a possibility of cross contamination.

This means that the product is made in the same production process as items containing egg and milk, so there is a possibility of cross-contamination.

Sometimes, it’s impossible to tell if a product has something in it as an ingredient, or there is just the possibility of small particles from cross contamination. For example, the following package of Quinoa Krunch says (一部に乳成分・大豆を含む), which means that the product contains dairy and eggs. However, dairy is not listed in the ingredients. Also, since it is marked vegan in English on the package, this time we can tell that (一部に乳成分・大豆を含む) means that small particles of dairy may be present in the product from cross-contamination. The soy may be the emulsifier, nyuukazai/乳化剤. Since the same warning, 一部に乳成分, is used both for products that have dairy as an ingredient and those that may have cross-contamination from dairy, it may be necessary to write to the company to find out if the product has dairy as an ingredient or not.

The kanji 含む (fukumu), seen above in relation to allergens and contamination, means ‘contains’ and the kanji 由来 (yurai) means ‘derived from’. You may see the latter in relation to emulsifier derived from soy: 大豆由来.  Unfortunately, it does not necessarily indicate that the product only uses soy emulsifier. For example, in the case of Meiji Cake Margarine, the package says 乳化剤（大豆由来）emulsifier (soy origin), but the customer service said that it also contains emulsifier from pig origin. Other types of emulsifier may be included as well.

You might also see 有機 (yūki), which means ‘organic’ and 遺伝子組換えでない (idenshikumikae denai) which means ‘not genetically modified’.

Please see the Dictionary on this website for more useful words when reading Japanese food labels.

A note on disclosure of ingredients

You should also be aware that Japanese law does not appear to require disclosure of all the ingredients in a food product. For example, take this Dan D Pak Fruitty Berry Muesli (a product imported from Canada):

The Japanese label was glued over the top of the English and French label. The list of ingredients in Japanese ends with ‘dry papaya’, making the muesli appear very wholesome. However the English label underneath lists the following additional ingredients after ‘papaya’: ‘sugar, citric acid, vegetable oil, sulphur dioxide, sodium metabisulfite, calcium chloride, tartrazine, sunset yellow FCF, allura red’ (see below). Of course this lack of disclosure is concerning, and particularly concerning for vegans.

Similarly, the following crackers are made with palm oil, which is listed in the original Italian ingredient list as palm oil, “olio di palma,” but it’s simply listed as “vegetable oil/植物油” in the Japanese list of ingredients: 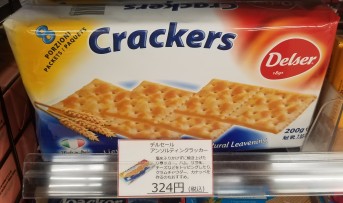 Here is another example of a product that appears to have unlisted ingredients. In the ingredient list of this 7-11 convenience store inari zushi, or sushi made of vinegared rice in a tofu pocket, no fish is listed. However, when the company was contacted in 2018, they stated all their inari zushi does have fish dashi to flavor the tofu pocket. It appears that a small amount of fish powder does not need to be listed on the label, if it is not a common allergen and the amount is small enough. Sometimes the ingredient list will state that the product contains “other” ingredients, “その他/sono ta,” but this one does not. Unfortunately, all convenience stores asked in 2018 stated they do use fish to flavor their inari sushi for all flavors they sell, even if they don’t write that on the label.

In Japan, soy is considered a healthy ingredient that is added to all sorts of products. Just because a product contains soy does not necessarily mean it will be vegan or even vegetarian. It’s still necessary to check the label. 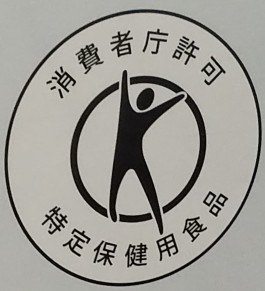 You may see foods and beverages bearing the  “Tokuho (food for specified health use)” mark, which looks like an outline of a person stretching. “Tokuho”  is short for “tokutei hokenyou shokuhin,” or foods with special healthy qualities, for example, foods that help maintain dental health, are suitable for people with high cholesterol, or that help with the absorption of minerals. The product needs to be tested in order for the company to apply to the government for permission to put the “tokuho” mark on their product. Generally, big companies are the only ones who apply for the “tokuho” mark as the process is expensive and they are not guaranteed to receive permission to use it.

However, a product bearing the tokuho mark does not definitively mean that animal experimentation was done. To find out for sure, it would likely be necessary to contact the company’s customer service.

In addition, a product not bearing the tokuho mark is not evidence that no animal experimentation was done to create the product.

There is more information about the Tokuho mark on the website of PEACE, Put an End to Animal Cruelty and Exploitation (Japanese).